A forum where you can make suggestions and post bug reports about our games.
To go back to our main site click HERE.

You are not connected. Please login or register

Red Aura when Girl is Carried

Posts : 3
Join date : 2013-12-13
The red aura that shows the girl is controlling the robot is nice, but gets annoying when you're carrying her. It could be toned down a little, to a small glow maybe? 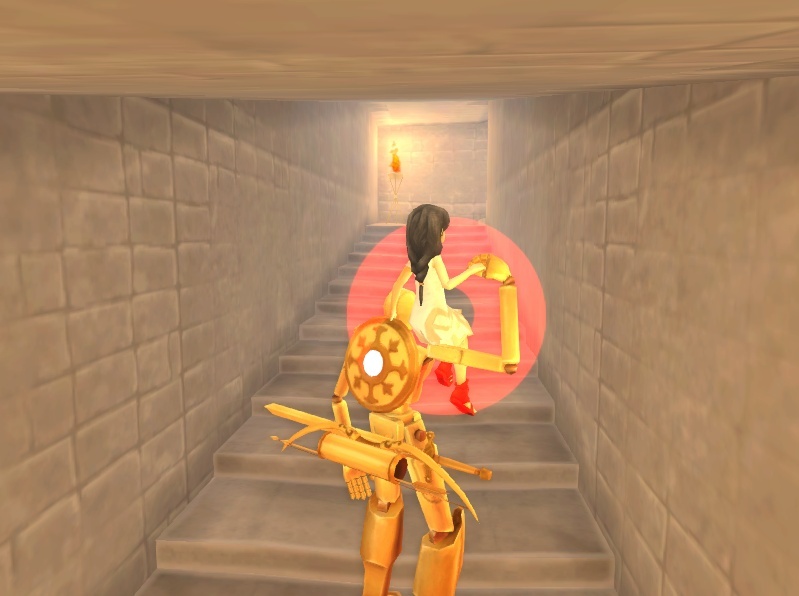 Posts : 18
Join date : 2013-12-16
While we're discussing this aura. I have a quick question.. I had the robot carry the girl up to the elevator room. On the way there the red light flashed brighter and made a weird sound. What does this signify?

Posts : 79
Join date : 2013-12-15
I noticed that the aura animation didn't change much in 0.006; only when the girl is standing by herself, and even then, if you approach as the robot, you can see that it just looks like a flat disk. The rest of the aura animations, when being carried or repairing the robot, look the same as 0.005

Posts : 18
Join date : 2013-12-16
Indeed, even on Fantastic quality I had the same impression that it looks like a flat disk.  I'm not too worried though.  I assume that will change as the game graphics are later refined.

Speaking of the auras... I want to say I'm a little disappointed they chose red.  I don't know why, but I always appreciate when designers go out of their way to utilize complimentary colors.  Complimentary colors are exact opposites on the color wheel.  Purple with yellow, red with green, and blue with orange.  Many graphic designers choose to have characters with complementary colors to show a certain amount of opposing force or to emphasize the differences in personality.  A great example... in the original Star Wars trilogy, the Empire's spaceships use red lasers while the Rebellion uses green.  Or... Sonic the Hedgehog is blue while his sidekick, Tails the Fox, is orange.  I was really pleased that the game designers gave the girl a yellow dress because it's the perfect compliment to the sorceress's purple outfit.  But then the sorceress has a purple aura and the girl has a red.  What happened?!  It would be different if the red corresponded to the robot somehow, but no such luck.

Posts : 79
Join date : 2013-12-15
I don't know about that, Ericus11. I think the red and purple kind of go nice against each other, like the gloves in Twin Sector. You can immediately tell who is on who's side: red jewel + gold robot = good; purple jewel + black robot = bad. I suspect that's the sort of childishly simplistic color identification the designers were going for. And in any case, I don't think that just because someone decided to put two colors next to each other on a wheel doesn't necessarily mean they always have to go together to look good.

Posts : 18
Join date : 2013-12-16
Hmmm... I guess you're right. Besides, I just remembered... orange and yellow are harmonic colors with red. So gold was the perfect color for the robot. I know it seems silly to nitpick, but these concepts are exactly what designers should consider when developing games, especially if they are relying on visuals to propel the story forward.

And don't underestimate the color wheel. No one just "decided" to put two colors next to each other. It was all very carefully constructed with a specific purpose. Still don't think my arguments hold weight? You're good at drawing and picturing things in your mind, so picture this... Imagine the girl standing next to the sorceress. First, picture the girl's dress as yellow. Then imagine it as blue. It doesn't look as good does it? That's because blue is harmonic with purple and they no longer appear to be opposing forces.

Admin
Posts : 180
Join date : 2013-08-01
Age : 39
Location : Montreal
Thank you for your input guys! As for you question about the glowing red flash Ericius; that means that the robot "stamina" is empty because you ran too much. If you get hit while in that state, you'll lose a armor part.

Posts : 79
Join date : 2013-12-15
In 0.007, the Aura animation got noticeably better when the girl initially turns the amulet on, but after that it just goes back to being boring. I assume that will be fixed later.

Posts : 7
Join date : 2013-12-16
As an extension to the aura, would it be against the intended spirit of the game to have a button to show a red aura pointing to the direction you left the girl? I just thought as we get deeper in the game, the possibility of forgetting where you left the girl would rise. A way to at least get some sort of a bearing to where the other character is would be something I'd appreciate.

Re: Red Aura when Girl is Carried